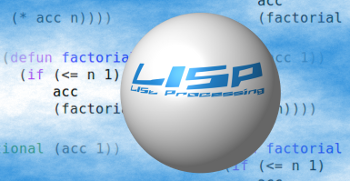 
Lisp is a programming language with a long history - it's actually one of the oldest languages - and the reputation of being very sophisticated. A rep accompanied by the anxiety that it is hard to learn, too hard some think. This is a course that simplifies the study of Lisp. Lisp the easy way!

Target Group:
Participants should have experience with at least one other programming or scripting language.


Our other Programming-Courses:
Content:
Lisp is an old language. Actually, it is the second oldest of those programming languages which are still widespread use nowadays, only Fortran is older.
But Lisp is still a modern language: With implementations like sbcl and closure (for Java) it is possible to design and create modern applications that are as fast as any other programming language, even C.

There is a huge library available for Lisp, especially if you are using Common-Lisp.
Another advantage of Lisp is that is is multi-paradigm. Unlike Java the user is not forced to write Object Oriented Code.


Is there a way to formulate the fascination of Lisp in a more beautiful way than George Boole did: "That language is an instrument of human reason, and not merely a medium for the expression of thought, is a truth generally admitted."


The fees for this Programming course per day: