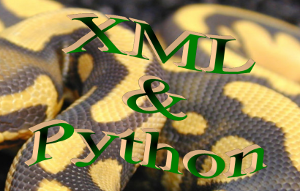 
XML (Extensible Markup Language) is a set of rules for encoding documents and data in machine-readable form. While Python is a powerful and easy to learn programming language with lots of XML processing solution. This training course combines two courses, i.e. both an introduction into XML for beginners and a complete Python course for novices.

Target Group:
This seminar is aimed at those who need both a course in XML and in Python.


Our other Python-Courses:
Content:
Python is not just another language in the Jungle of programming languages. Python is a language which sticks out, because it is easy to learn and to read due to its clear syntax. Furthermore development is a lot faster with Python. Last but not least it runs on nearly any machine and operating system. The last point is very important in combination with XML. One of the main design aspects of XML have been data portability. Lots of XML processing solutions are available for Python. In this course you will both the fundamentals of Python and the concepts of XML. We use lots of practical examples and exercises to deepen your understanding of Python.


The fees for this Python course per day:

Attention:
The price of this course includes participation in the seminar and board and lodging in a 4-star hotel located at Lake Constance.